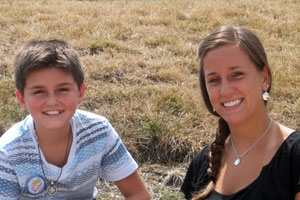 The changes in Tyler’s life, socially and academically, show what can happen through a positive mentoring relationship between a caring adult and an at-risk youth.

Tyler used to be a shy boy with poor grades. When Jackie became his Whiz Kids tutor and mentor, that all changed.

Before he joined Whiz Kids, Tyler says, “I had a D in Science, an F in Math and an F in Reading.” Those grades became A’s, and he is more confident, outgoing and calmer. Jackie is amazed at the improvement in his grades and his confidence.

“He used to be so hyper,” Jackie says. “He has grown and matured so much.”

One hour a week of tutoring grew into a little more time as a mentor going to the aquarium, the movies or usually out to eat.

When asked what she would say to someone who wanted to help tutor and mentor through Whiz Kids, Jackie says, “The experience is awesome. Even if you think you don’t have the time … just try it. It is definitely worth the time.”

There are over a thousand youth tutored in Whiz Kids, and each of them needs someone to invest in them outside the classroom in order to effect real life-change.